We Deserve Equality, Dignity, and Respect

Attacks on women’s health have reached a dangerous new level.

This year South Carolina legislators introduced multiple bills that would ban abortion, criminalize reproductive health care and punish women and their doctors. These extreme bans on abortion are out of touch with South Carolina values. According to a recent Winthrop poll, a significant majority of South Carolinians recognize the need for abortion care. Like them, WREN will continue to work to ensure abortion care remains safe, legal and accessible for those who need it.

Below are the major bills proposed this year that would effectively ban all abortions in South Carolina. 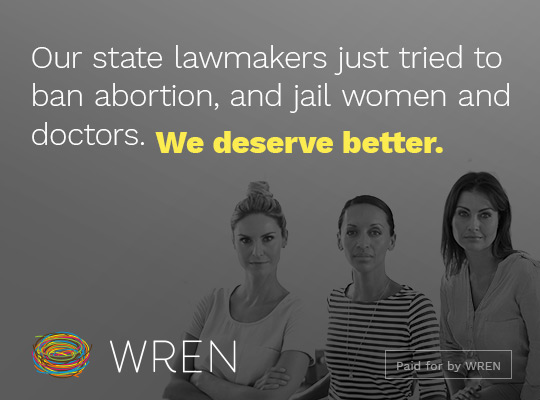 The so-called “heartbeat” bill (H.3020 and S.32) would prevent most women from getting abortions as early as six weeks into a pregnancy; this is before many women even know that they are pregnant – before they even know they have a decision to make.

Additionally, this bill would criminalize doctors. If found guilty of ending a pregnancy after a heartbeat is detected, a doctor could be convicted of a felony and subject to years in prison.Trusted medical authorities like the SC chapter of American College of Obstetrics and Gynecology oppose this bill because the provision of health care during pregnancy would be severely compromised and discourage doctors from treating pregnant women. In a state that already has a lack of obstetricians and gynecologists, we cannot afford to put up any more barriers to quality care.

There are already multiple restrictions on abortion care in South Carolina. Many women seeking abortion already face logistical obstacles like finding a provider, securing childcare and transportation, and saving funds to cover all of the costs – all of which create delays, and in some cases, stop women from getting the abortion they want.

Any woman of reproductive age would be affected by this law, but the worst effects would be on people who already face barriers to health care, including young women, women of color, women with disabilities, women with low incomes, and women in rural areas.

The so-called “Personhood” Act of South Carolina (S.485) would impact ALL pregnant women and people who want to be pregnant. By giving fertilized eggs have the same rights as pregnant women,  we would give the state power to police all aspects of reproduction and pregnancy. Women could be criminally liable for preventing pregnancy through contraception, for seeking fertility treatment, for miscarriage, and for abortion.

According to National Advocates for Pregnant Women, there is a 15–20% chance of miscarriage or stillbirth in every pregnancy. If the act passes, any woman who loses a pregnancy could be investigated, interrogated, arrested, and prosecuted if someone believes she could have or should have done something to prevent that loss. As numerous well-documented cases from around the country prove, women have already been arrested and charged with crimes (murder, depraved heart homicide, manslaughter, feticide) because they experienced miscarriages and stillbirths, or because the woman was unable to “guarantee” that the child she gave birth to would survive.

We know this to be true because even without this act, the South Carolina State Supreme Court  in the case of Cornelia Whitner* interpreted one criminal law, criminal child neglect, to permit  the prosecution of a woman for actions during pregnancy, prior to even giving birth to her child.

Help make South Carolina a place where women are afforded the equality, dignity, and respect they deserve. Sign this petition today!

*Whitner v. State, 492 S.E.2d 777 (S.C. 1997) (relying on unique South Carolina case law and the court’s common law authority to create new crimes, the court interpreted the word “child” in the Children’s Code to include viable fetuses, upheld conviction for child neglect of a woman who gave birth to a healthy newborn that tested positive for cocaine, and found no violation of due process or privacy rights.)