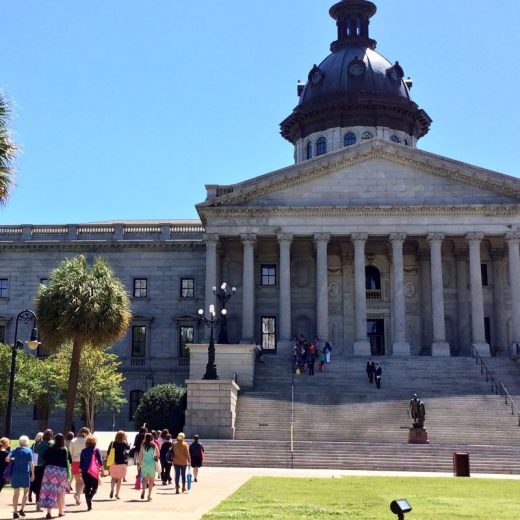 The legislature adjourned the 1st regular session of the 123rd South Carolina General Assembly in May. While many of the state’s priorities for the year are left unfinished, WREN made progress in advancing issues affecting women, girls, and families, and successfully stopped a 6-week abortion ban for this year. The two-year session of the SC General Assembly resumes in January 2020, and WREN will be upfront to ensure that the priorities of women and girls rise to the top of the list.

So far this year WREN championed four proactive bills, supported several additional proactive bills, and defended against the passage of abortion restrictions. We facilitated 4,260 contacts between advocates and legislators during this session and garnered 126 media hits on our priority issues.

WREN’s high-level priorities in this current legislative session are to: a) advance equity and opportunity for women in the workforce; and b) support reproductive freedom of families to determine if, when, and how they become parents.

ADVANCING EQUITY AND OPPORTUNITY FOR WOMEN IN THE WORKFORCE

An Act to Establish Pay Equity (H.3615 & S.372) ensures that employee pay is based on factors such as skill, effort, and responsibility; bans the use of salary history; and provides pay transparency without retaliation. WREN introduced the comprehensive pay equity bill with bipartisan support in the House and Senate this year. Wage discrimination affects women across industries, from professional athletes like Aja Wilson to lawyers to low-wage hourly workers. We have educated lawmakers, community members, partners, and the media about the continued need to address gender and racial wage gaps, culminating in the annual WREN Summit and a press conference at the Statehouse on Equal Pay Day. In order to get movement on this bill in 2020, we need widespread and vocal support from South Carolinians.

The South Carolina Lactation Support Act (H.3200 & S.406) builds on the South Carolina Pregnancy Accommodations Act, which WREN helped pass in 2018, by providing more people with the right to break time and private space to express milk in their workplaces. The bill passed the House of Representatives by a vote of 93-0 in March 2019. We have already laid the groundwork for support in the Senate. With the help of our members and coalition partners we will push for swift passage in 2020.

12-Month Supply of Birth Control Act (H.3279 & S.187) provides access to a 12-month supply of birth control at one time. On the last day of the session the House LCI insurance subcommittee debated the bill. While action was not taken the subcommittee committed to reconvening early in January 2020 to address the policy. WREN will be meeting with stakeholders like insurance representatives and medical providers over the summer to find a compromise for legislators to act on in January.

Defending Access to Safe Abortion Care. While other Southern states were quick to pass restrictive abortion policies, we ended the 2019 legislative year without a bill ending up on our Governor’s desk. While we are better situated than others this year, the 6-week ban (H.3020) that passed the House will be debated in the Senate in 2020. Governor Henry McMaster has publicly stated he will sign the bill if it comes to his desk. In May WREN led a major educational campaign with digital billboards, paid media, and earned media to educate South Carolinians understand what is at stake and compel them to take action. In response to this campaign, over 8,000 South Carolinians have signed on to a petition in support of women’s equality, dignity, and respect and opposing such extremist abortion ban bills.

Addressing Child Marriage (H.3369 & S.196). After the Post and Courier raised awareness on the problem of child marriage in South Carolina, the Children’s Committee sponsored legislation to remove the pregnancy exception from the child marriage law in South Carolina (meaning, child marriage was illegal unless a girl under 16 became pregnant, in which case marriage would be legal), which passed unanimously through both chambers and has been signed by the Governor. WREN testified on the harms of child marriage and pushed the legislators to take the next step further to introduce an outright ban on child marriage (S.395), raising the age to 18. We will be pushing for that bill to be heard in 2020.

Additional Bills We Support. WREN also supported our partners in their effort to improve the health of the state this session. We testified in opposition to the “ban on bans” policy (S.394) and highlighted how plastic waste uniquely impacts women and girls’ reproductive health. This bill made it to the Senate floor and we will continue to stand with our partners to ensure that local governments are able to protect the health of their communities. WREN also mobilized people to take action to support the bill reauthorizing the community development tax credit (H.4133), which has helped organizations raise funds for programs that help women attain educational opportunities, receive free, quality childcare, and learn valuable life skills.

We must continue to use our collective voices both in and outside of legislative session to make a positive difference for the women and girls of South Carolina. During the off session you can stay active by making sure you are a part of the WREN network (www.scwren.org/take-action/join) and by calling your elected officials and letting your voice be heard on this issues. See Ashley Lidow’s blog for more ideas!