Increasing women’s participation in South Carolina’s labor force is critical to economic growth for our state.

There is a significant, projected workforce shortage in South Carolina over the next decade. By addressing this workforce need, women have the opportunity to create a net gain in economic activity for our state and simultaneously make strides in reducing the gender wage gap. These gender gaps in South Carolina’s workforce are profound. Working together, however, we can close them, driving powerful economic growth and positive change.

In the next decade, South Carolina will need as many as 26,140 additional workers per year. If women help fill those positions, increasing their overall presence in our state’s workforce from 48.3 percent currently to 54.0 percent by 2025, it could generate unprecedented opportunities for our state. 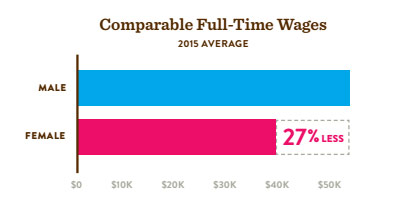 While the state’s gender pay gap has declined since 2005, women working full-time still earn lower annual salaries than men — an estimated $15,861 per year less after controlling for race, occupation, nativity, moving status and age. Although South Carolina women, on average, are more highly educated than their male counterparts, a 22 percent pay gap persists even within occupations with the highest educational requirements in the state. 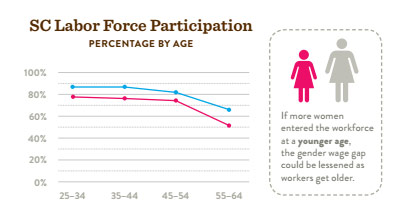 Women are more likely to be out of the labor force than men, regardless of age. Employment levels peak for both women and men between ages 35 and 44, while the smallest difference in gender employment levels is between ages 45 and 54. Gender differences in labor force participation among younger workers could partially explain why the gender wage gap is progressively larger as workers age. The effect of differences in experience is cumulative over time. 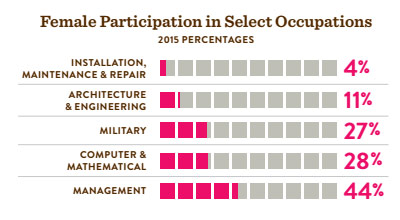 Gender differences vary significantly by occupation and industry. And professions that were male-dominated in 2005 continue to be in 2015. The military is an exception, however, where women’s involvement increased significantly over the last decade.

Help us ensure South Carolina’s women are prepared to meet this unprecedented opportunity. Together, we can lead the way toward positive change across our state. Click here to see the full report , slideshow , and a summary of proceedings.