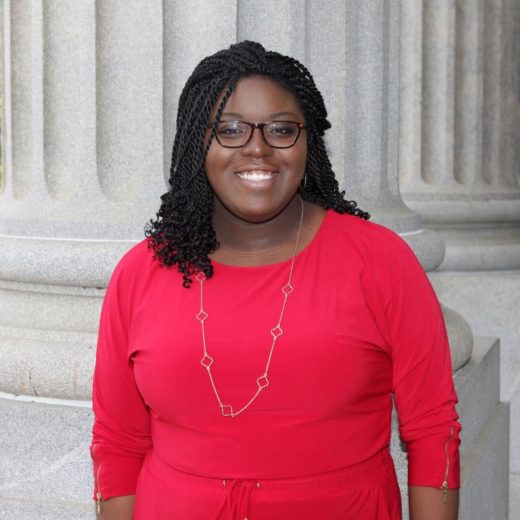 Our nest is getting bigger! Meet WREN’s newest staff member, Courtney Thomas.  As our Upstate Liaison, Courtney will be spending a majority of her time doing community engagement work in the Upstate area. Stay tuned for information regarding an upcoming local meet and greet.

1.Where are you from?

I’m originally from Irmo, SC.  After graduating from Dutch Fork High School, I attended Furman University. Greenville has been my home for about 7 years now, so I consider myself a native (I know where to find the good coffee).

2.What did you do previously before coming to WREN?

After graduating from Furman, I did internships with the National Bar Association and the Council for Opportunity in Education in Washington, DC. After my time in D.C. I moved back to Greenville and started working at Furman. I worked in the Office of Admissions as an Assistant Director of Admissions. I loved higher ed because it allowed me to influence a person’s life during a critical moment.

3. What drove you to get involved in this cause?

As strange as this sounds, this is really in my own self interest.  I’ve always had an awareness of my identity and the space in which I exist.  I am both Black and a woman and for a long time I felt like I had to choose between those two identities. I admire WREN because I feel that this is a space that will allow me to work in and for both communities.

4. When you’re not working, how do you like to spend your time?

I am a firm believer in the power of MoviePass. My friends and I actually relish seeing terrible movies. It’s like Netflix, but for movies that are currently in theatres.  Beyond that I’m a member of a few book clubs and community organizations.

5. If you could meet one woman from any period of time, who would it be?

If I could meet any woman, I’d love to meet Eartha Kitt. Her story is incredible because she, the daughter of a sharecropper from Orangeburg, South Carolina, was able to make an indelible impact on the world. From her fame in pop culture to her activism, Eartha was always uniquely confident in her body and her talents. In a 1982 documentary, an interviewer asked her if she would ever compromise in a relationship.  She responded, “When you fall in love, what is there to compromise about? I think if you want to think about it in terms of ‘analyzing’, yes, I fall in love with myself and I want someone to share it with me. I want someone to share me with me.” I watch that clip of Eartha saying those lines at least twice a month.  She inspires me because she had unshakable confidence. She refused to cede power not in an antagonistic way, but because she loved herself. I only recently learned how to practice that kind of self-love and I’m learning more every day.

6. What is one mantra that you live by?

Most people that know me know how much I love Beyoncé.  I’ll admit I wasn’t always a fan, but on February 6, 2016, Beyonce Giselle Knowles-Carter released Formation and everything changed. My favorite line from the song is, of course, “Ok, ladies ladies, now let’s get in formation.” I sincerely believe Formation is a protest song for the modern era.  To get in formation is to assess one’s current situation, gather a team and get to work.

The Center for American Women in Politics (CAWP) recently released a report about “The Chisholm Effect.” This is a phenomenon that echoes 1992’s “Year of the Woman,” but this time it’s about African American women running for office.  Race and gender matter. Black women are highly civically engaged, yet to this moment Black women only make up 3.6% of the United States Congress. 2018 is a year of change and hopefully this is the beginning of something great.