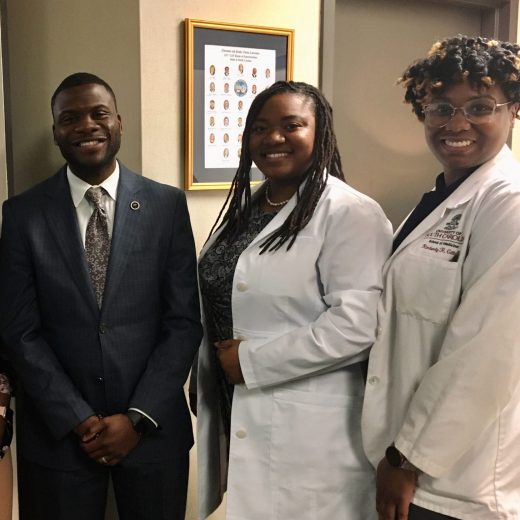 On Thursday, February 27, 2020 the House Subcommittee on Social Services, Mental Health, and Children’s Affairs met to hear testimony on H. 4712 (the South Carolina Dignity in Pregnancy and Childbirth Act).  Dr. Kari-Claudia Allen testified and encouraged legislators to vote in favor of the bill.

Dr. Allen’s testimony begins at 3:20 in this video, read her testimony in full, below.

My name is Dr. Kari-Claudia Allen, and I am a board-certified family medicine physician who delivers babies, a professor, a community advocate, but most importantly, I am a Black woman who is tired of Black women dying needlessly in childbirth. Today, I am standing here in the honor and memory of:

Dacheca Fleurimond, mother of 3, deceased age 33, the day she delivered her twins

These are just a few of the names of women who had a funeral before their babies had their first birthdays. The stories of these women nearly bring me to tears every time I think of them, but none have hit as close to home as the death of a young lady born right here in South Carolina, after delivering twin babies a year ago. She is the granddaughter of one of my patients and the cousin of one of my closest friends. Her family has asked for anonymity, as they are still in a state of deep shock, trying to balance grieving while remaining strong enough to raise these little ones. She was in her mid-twenties, married, and had just graduated from her doctoral program, when she found out that she and her husband were expecting. She was ecstatic to be bringing life into the world, and even more so to be expecting twins. Being a doctor, she knew her body and knew how to advocate for herself in the hospital setting, and yet, that did not save her life when she went in to deliver her babies. While details surrounding her death are still being reviewed, her family is still trying to piece together how a healthy mother with a healthy pregnancy could end up dead, with little to no warning. Unfortunately, they are not alone.

The United States is in a maternal mortality crisis. Not only are our mothers dying at rates that skyrocket above every other developed nation, but our maternal death rates actually doubled from 1990 to 2014. While every other nation in the entire world has accomplished some decline in their maternal death rates, we are one of only 13 countries in the world whose mortality rates are rising year after year. What’s even more criminal, is that even in 2020, the most predictive factor of whether or not you will survive your pregnancy is the color of your skin.

The Centers for Disease Control (CDC) in Atlanta, GA collects national data on maternal deaths that shows over 700 women die each year related to pregnancy, and Black & Indigenous women are 3-4 times more likely to die from childbirth than their white counterparts.

Additionally, there are about 50,000 pregnant women who did not die from childbirth but suffered severe, lifelong complications. When looking at education and income level, the poorest, least educated white woman still has a better chance of surviving childbirth than the most educated, wealthy Black woman – most notably Beyoncé and Serena Williams, who both suffered significant morbidity around the births of their children.

Even more startling is that 3 out of every 5 of the maternal deaths reviewed by the CDC were found to be preventable. Here in South Carolina, 54% of all maternal deaths reviewed by our Maternal Mortality Review Committee (MMRC) from 2016 to 2018 were found to have been preventable. That means in that in over half the cases reviewed, there was something different that could have been done by that woman’s healthcare team that could have kept her alive.

So what are we compelled to do?

I’ll start by taking a look at my own career. In my 4 years of undergrad, 4 years of medical school, 4 years of residency training, and 2 years of being a practicing physician, I have never received formal longitudinal implicit bias training as part of my medical education. While I have been fortunate to study and work at institutions that have implemented some bias and anti-racism training, such as my current hospital, it is not a standardized process across medical schools, hospitals or prenatal care offices in the state. The bias training most physicians receive often comes in the form of annual compliance requirements and is not geared specifically toward maternity care.

The definition of implicit bias is the unconscious activation of prejudice notions (of race, gender, ethnicity, age, etc) that influences our judgment and decision-making – defined by Dr. Patricia Devine in 1989. By definition, all people have some form of unconscious bias, based on our lived and learned experiences. That is to be expected. However, if biases show up without our conscious knowledge, when our patients are in their most vulnerable states, it can cost lives. It is impossible to explore, confront, and address bias one doesn’t even know is there. It’s even more difficult to do something about it without proper training and tools.

The need for implicit bias training has been noted all over the country, as an effective means to undermine our rising maternal death trend. A study performed in New York City was published in the American Journal of Obstetrics & Gynecology in January 2020 that showed disparities based solely on race in thousands of women who all delivered their babies inside the same hospital. Low-income women on Medicaid actually had very similar pregnancy outcomes as women with commercial insurance. However, African-American and Latina women had significantly higher rates of severe pregnancy complications, when compared with their white counterparts who delivered in the same hospital at the same time. Insurance and income did not play a factor here, but race did.

One of the largest bodies of qualitative research has come from the Black Mamas Matter Alliance (BMMA), the National Birth Equity Collaborative, the Pre-Eclampsia Foundation, and other similar advocacy and research groups that have shared countless stories of Black women not feeling heard or validated by their physicians. This problem is not unique to pregnant Black women, but it is much more prevalent in their experiences.

The BMMA put forth a human rights framework that calls for governments to take positive steps toward the full realization of the human right to safe and respectful maternal care. According to 2018 toolkit produced jointly by the BMMA and the Center for Reproductive Rights, “In August 2014, the UN Committee on the Elimination of Racial Discrimination (CERD) called on the United States to eliminate racial disparities in health in order to fulfill its international human rights promises to end racial discrimination in medicine. This group of independent experts expressed concern over persistently high rates of maternal mortality among Black women and called on the U.S. government to ensure access to adequate and affordable health care services for all. Poor maternal health was also raised as a key human rights concern during May 2015.” They go on to describe a Human Rights Council review in which the “government of Finland called on the United States to ensure equal access to quality maternal health services. The United States accepted this recommendation without reservation, recognizing that the high rate of preventable maternal mortality—including racial disparities in maternal health outcomes—warrants government action and accountability.”

That’s where the State of South Carolina comes in – with government action and accountability. South Carolina is already an Alliance for Innovation on Maternal Health (AIM) partner, meaning that our hospitals will be implementing “bundles” across the state to ensure standardized treatment of hypertension, postpartum hemorrhage, and other obstetric emergencies with the same quality of care across the entire state. We are also already in compliance with the federal Preventing Maternal Deaths Act of 2018, which has mandated that each state have a Maternal Mortality Review Committee or MMRC. Ours is operating and has been reviewing cases for a little over a year now. Each hospital system in the state has even gone so far as to implement a chief officer of diversity and inclusion at their hospital campuses.

I highlight these initiatives to show that we have effectively begun the process of having a comprehensive approach to maternal mortality reduction in our state. What we have not yet tackled is the disparity in Black maternal deaths. We have not taken on the hard fight of eradicating bias in our maternity care system with ongoing, longitudinal implicit bias training. This is the opportunity before us today with bill H.4712. The State of California recently passed a similar bill that requires OB providers to take implicit bias training, even as the state with the lowest maternal mortality rate in the nation.

We have the opportunity to be the first in the South, where maternal death rates loom highest, to show that we take this matter seriously and that we are on the frontlines to see an end to

preventable maternal death. I implore you to support H. 4712 to ensure that physicians, midwives, nurses, and other providers who take care of pregnant women all over this state are prepared to handle their biases with the same rigor and care with which they handle medical emergencies. The time is now. We cannot wait any longer. We cannot afford to lose the cost of another mother’s life.

Legislators voted 4-1 in favor of the bill, H. 4712 will now move to the full committee for their review.

WREN is committed to making advocacy accessible for all people.  We live-stream public hearings to bring light to an often opaque process. Turn on your notifications and follow us on social media to be notified of our live-streams.

To learn more about the legislative process, check out our Take Action page.  There are many issues in South Carolina that need your support if you’re ready to take action, consider writing a letter to your legislator using these templates.