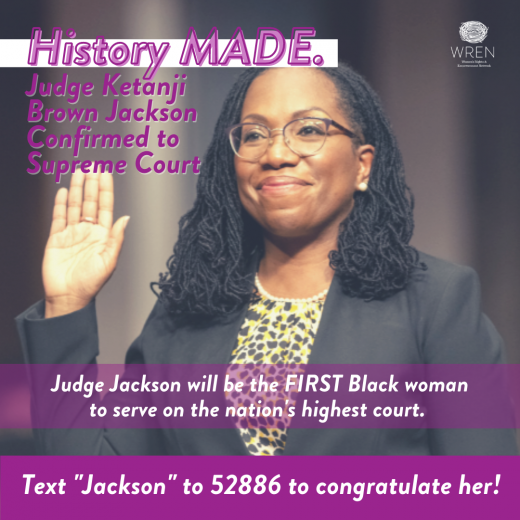 “Today marks a historic moment not just for our nation, but for gender justice.  Judge Ketanji Brown Jackson will be the first African American woman to serve on the Supreme Court of the United States.

Through a difficult confirmation process, Judge Jackson rose above blatantly partisan attacks aimed at her because of her race and gender. She joins the court at a pivotal time when so many of our rights hang in the balance.  While Judge Jackson’s vote may not shift the ideological balance of the Court, her voice is a necessary element that the Court has never had in its over 200-year history.  Black Women have led every social movement for progress in our nation’s history.  Today we celebrate Judge Jackson and the Black Women who organized and persevered to make this historic moment possible.”

About WREN: The Women’s Rights and Empowerment Network (WREN) is a South Carolina-based nonpartisan nonprofit. WREN uses a gender justice framework to build a movement to advance the health, economic well-being, and rights of South Carolina’s women, girls, and gender-expansive people.  Learn more at scwren.org.