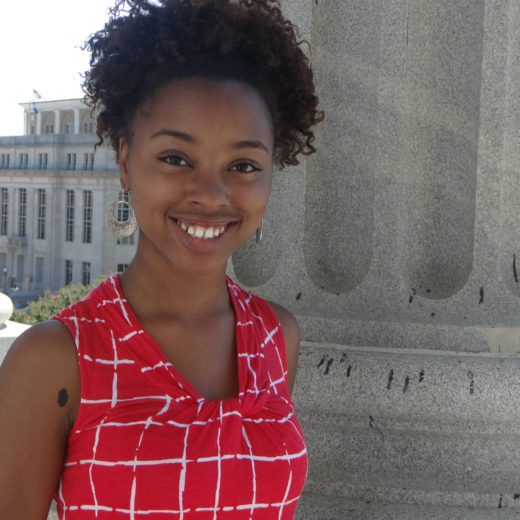 Ariel Simpson-Logan is one of those people whom you meet and instantly think, “man, she’s taking over the world someday.” Fortunately for us, she’s starting early.

Ariel is currently the Grant Project Coordinator for the New Morning Foundation. Originally hired on to work with the foundation’s ambassador program in 2014, she quickly transitioned to working with grant money issued by the Office of Adolescent Health (OAH).  Now, two years later, the grant is almost complete, and has been fully used to design and implement a three tiered public health campaign to increase community mobilization surrounding unintended teen pregnancy in the Orangeburg area.

“It’s a very conservative community and we had to be very strategic when we got into Orangeburg in order to create some type of change. So rather than just focus on teen pregnancy, we decided to focus on youth empowerment, and that’s how we started the Orangeburg Coalition for Youth Empowerment,” said Ariel.

Ariel then began planning and structuring meetings for the coalition which included a main leadership team and a youth leadership team.  The youth leadership component formed from a small group of community teens that joined the group through an application and interview process, and that wished to make an impact in their community by developing long-term solutions for teen pregnancy prevention. But this wasn’t an easy project to start.   Throughout the first year, the coalition had to gather enough information to develop an in-depth needs assessment on Orangeburg county. This was necessary in order to produce statistics and data regarding the rates of unintended teen pregnancy, STI’s, community engagement levels, and already available resources and services regarding this topic area.

Once data and information was collected, Ariel and the team began to plan what course of action would be most effective in addressing the community needs.  Based on the results, the coalition first made the decision to work with the South Carolina Campaign to Prevent Teen Pregnancy in order to help implement sex education in the form of EBIs (Evidence Based Intervention) throughout all three schools districts in Orangeburg.  Prior to this move, students within some districts were not receiving any type of sex education, even though evidence based and comprehensive sex education programs are proven to reduce unintended teen pregnancies. Starting this school year, all districts will be provided with medically accurate sex education programs.  The SC Campaign plans to continue expanding this work within the community.

Next, health clinics were contacted and conversations were started on how to make local clinics more youth-friendly. Lastly, the youth leadership team had to decide on how they wanted to incorporate their mission into social media. This is when the team decided to step out of the box.

“Originally we had a completely different idea for our social media campaign, but after talking to the community and the students, we found that there’s not enough information about birth control and STI’s.  So instead of just saying “Don’t get pregnant,” we decided to make more of an informative product and meet the teens where they’re at:  on their phones,” said Ariel.

At first having no background in coding or in application design, the teens within the coalition were eager for direction.  So when a community leader stepped in to teach them the basics- they ran with it.

While the application is finished, it will not be available for launch until it meets final approval by the OAH grant committee. Ideally, the free launch will occur this summer.

“I really want this to be used by youth in Orangeburg.” said Ariel, “Maybe at least 500 downloads? This project can exist in five years, it can continue to develop and grow maybe even into the school systems. I want this to be a lasting impact.”